The word Biryani comes from two Persian words: Birian, which means “fried before cooking”, and Birinj, or rice. Ancient cookbooks claim that biryani originated in Persia and came to India through the Mughals. It was later developed into various varieties by the chefs of the royal Mughal cuisine. British historian Lizzie Collingham claims that modern biryani was developed in the royal kitchens of the Mughal Empire and is a mixture of spicy rice dishes indigenous to India and Persian pilaf.

Akbar had a frugal appetite, but one of his navratnas (nine jewels of Akbar’s court), Abul Fazl, is said to have had a huge appetite.

The Mughal “tradition” is dotted with anecdotes concerning the biryani. Legend has it that on one occasion Emperor Shah Jahan’s wife Mumtaz Mahal visited the army barracks and noticed that the soldiers looked hungry. She instructed the royal cooks to prepare biryani for the ravenous soldiers and feed them until their hunger was sated.

The last Mughal emperor Bahadur Shah Zafar, even in his advanced age, savored the delicacies prepared by Mir Bakwal, the chef of the royal kitchen. Bakwal was known to frequently prepare biryani and other dishes using venison, quail and partridge meat.

Considering the historical legacy of biryani in India and its enduring popularity, we present two popular biryani recipes from the royal kitchens of two kingdoms who mastered the art of biryani:

It was one of the popular biryanis made for the Mughal Emperor and his family and was known for its fine taste and rich flavor.

• Wash the rice well and boil it until 90% cooked. Filter the water and keep it aside.

• Grind the cashew kernels into a smooth paste.

• Add 3 tablespoons of oil to a pan and the onions until golden brown.

• Add the remaining oil to a heavy bottomed container and sauté the cinnamon, cloves, cardamom and peppercorns.

• Add the onions and fry until bright, then add the ginger and garlic paste to it and fry.

• Add the marzipan and cook for 5 minutes then add the spice powders and mix gently.

• When the oil begins to leave the sides of the container, add the chicken and cook until cooked through.

• Add the salt and cover the container and cook until the meat is tender.

• The pan should be tightly covered and cook over low heat for 20 minutes. 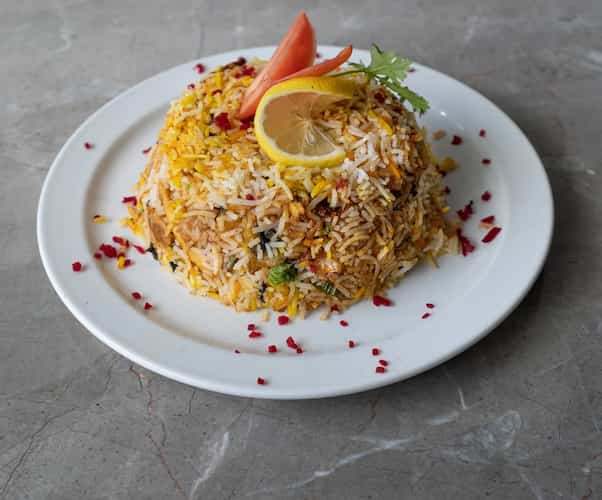 For many foodies in India, there is no parallel to the Hyderabadi DumBiryani. This (almost) undisputed leader of biryanis came into existence after Mughal Emperor Aurangzeb declared Asaf Jah I as the Nizam-Ul-Mulk, the ruler of Hyderabad region. Thenizam cooks invented about 50 different varieties of biryanis using ingredients like fish, deer, quail and hare meat.

• Half a cup of mint leaves (pudina)

• A cup of coriander leaves (dhania)

• Wash the rice well and keep it aside. In a heavy-bottomed container, add the rice, salt, bay leaves, green cardamoms, black pepper and cinnamon stick and cook until the rice is almost cooked.

• Drain the water and keep the rice aside. Add the saffron strands to the milk and leave to soak.

• In a wok, add the oil and half the onions and sauté until golden brown and set aside.

• In a pan, add some ghee, cinnamon and black cardamom and fry for 2-3 minutes. Add the remaining onions and cook until lightly browned.

• Add the marinated mutton and cook over high heat for 5 minutes. Cover and cook a little longer over low heat until the meat is tender.

• Add the remaining ghee to a large pot and layer a few layers of rice on top of it, then add a layer of mutton on top of the rice and sprinkle mint leaves on top.

• Now spread the remaining rice over it and pour the saffron milk over it and cover and cook over low heat for 15-20 minutes.